‘THE ART OF MERCY’ 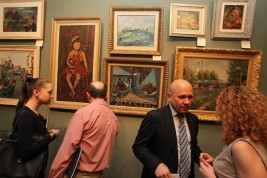 ‘The Art of Mercy’ is a series of charitable auctions meant to help the younger generation. The main goal of the project is to draw public attention to the problem of children’s health in Ukraine, initiate and encourage patronship activities for solving it.

Before the event, the Kharkiv-based AVEK gallery and the Kyiv-based Bohdan and Varvara Khanenko Museum held open exhibitions for everyone. As a result, ‘The Art of Mercy’ found its fans even abroad: a French actress Mylene Demongeot and the world-class film star Jean-Paul Belmondo became interested in the project.

In the end, the first auction collected about 2 million hryvnia. All funds raised by selling the lots were donated to help Kharkiv City Center of Child Neurosurgery to purchase medical equipment produced by Nicotel: Endeavor CR, Anspach Effort Inc and Synthes Inc. At that time, such equipment was unique in Ukraine.

With consideration of the perfect results given by the first part of the project and the lively interest it had sparked in art patrons, the Fund decided to continue the program.

‘The Art of Mercy 2’ auction took place in 2013 in the territory of Art Arsenal Center (Kiev). The charitable party was dedicated to raising funds for construction of the Center for rehabilitation of children and teenagers with mental disorders. Its lots were 85 works of painting, graphics and sculpture by 47 most talented members of the famous Paris School. They included masterpieces by such notable masters as Mark Chagall, Pablo Picasso, Mois Kisling and Hana Orlova.

‘The Art of Mercy 4’ project will be aimed at supporting young talented Ukrainian authors. By holding a series of exhibitions featuring their works in Ukraine and abroad the Fund will popularize the creative work of our compatriots. Later, works by the project participants will be sent to an international auction as lots used to raise funding to help injured children from the ATO area.